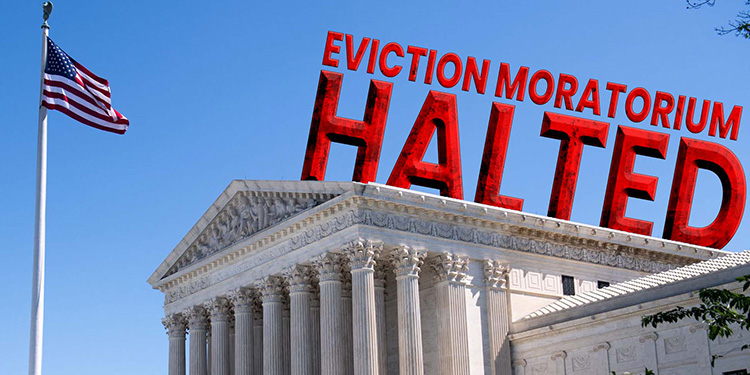 The Supreme Court on Thursday night blocked the Biden administration’s new eviction ban, in a ruling that left millions of Americans at risk of losing their homes during the pandemic.

The decision to suspend the moratorium more than five weeks before its Oct. 3 expiration was a win for landlords and property owners, who have spent nearly a year in court fighting eviction bans imposed by the Trump and Biden administrations. Two chapters of the National Association of Realtors petitioned the high court earlier this month to immediately overturn the latest version of the ban, issued by the Centers for Disease Control and Prevention.

The court conveyed its decision in an eight-page, unsigned opinion that said the CDC’s power to take steps to rein in the coronavirus pandemic did not appear to extend to issuing a moratorium on evictions. The majority said the Biden administration was arguing to give the agency “a breathtaking amount of authority.”

“If a federally imposed eviction moratorium is to continue, Congress must specifically authorize it,” the per curiam opinion said. “It is indisputable that the public has a strong interest in combating the spread of the Covid-19 Delta variant. But our system does not permit agencies to act unlawfully even in pursuit of desirable ends.”

The Supreme Court’s three Democratic appointees dissented, joining an opinion from Justice Stephen Breyer that argued the ruling was mistaken given the recent exacerbation of the pandemic, changes in the most recent version of the eviction ban and the emergency posture of the case.

The Biden administration imposed the latest ban Aug. 3, after coming under pressure from Democrats and housing advocates in the wake of letting the previous moratorium expire July 31. That moratorium was first issued last September in a bid to protect tenants who had lost income during the pandemic crisis.

In response to litigation brought by the Realtors against the earlier ban, the Supreme Court had already signaled that the policy was likely on shaky legal footing. The high court, in a 5-4 decision on June 29, allowed the moratorium to continue until its expiration July 31, but Justice Brett Kavanaugh — the deciding vote on the ban — warned in his concurring opinion that the CDC had gone beyond its legal power and that the ban’s imminent expiration was what motivated him to let it stand temporarily.

President Joe Biden himself acknowledged doubts about the new ban’s fate in court on the same day the CDC rolled it out, saying “any call for a moratorium based on the Supreme Court’s recent decision is likely to face obstacles.” Still, he said, “by the time it gets litigated, it will probably give some additional time” to state and local officials working to disburse $46.5 billion in rental assistance. The distribution of the aid has seen severe bottlenecks, with state and local governments having used just over 10 percent of the federal funds as of the end of July.

“As a result of this ruling, families will face the painful impact of evictions, and communities across the country will face greater risk of exposure to Covid-19,” she said. “In light of the Supreme Court ruling and the continued risk of Covid-19 transmission, President Biden is once again calling on all entities that can prevent evictions — from cities and states to local courts, landlords, Cabinet agencies — to urgently act to prevent evictions.”

Rep. Cori Bush (D-Mo.), who led a sit-in on the Capitol steps that helped spur Biden to revive the ban, said Congress must act immediately to prevent mass evictions.

“I urge my colleagues to reflect on the humanity of every single one of their unhoused, or soon to be unhoused, neighbors, and support a legislative solution to this eviction crisis,” she said.

Breyer’s dissent Thursday addressed Kavanaugh’s solo opinion from June and rejected the notion that it amounted to a controlling pronouncement from the court.

“Certainly this Court did not resolve the question by denying applicants’ last emergency motion, whatever one Justice might have said in a concurrence,” Breyer wrote. “The scope of that challenged moratorium, the balance of the equities, and the public interest were all different. As is typical in this Court’s emergency orders denying extraordinary relief, we said almost nothing about our reasons for declining to act.”

While no member of the court other than Kavanaugh explained his or her vote in June, the per curiam opinion issued Thursday was an unusually lengthy explanation of the court’s action on its emergency docket, where cases get less detailed briefing and the justices act without the benefit of oral argument.

The court’s majority said the view advanced by the Biden administration and the dissenters would give the CDC “a breathtaking amount of authority.”

“It is hard to see what measures this interpretation would place outside the CDC’s reach. … Could the CDC, for example, mandate free grocery delivery to the homes of the sick or vulnerable? Require manufacturers to provide free computers to enable people to work from home? Order telecommunications companies to provide free high-speed Internet service to facilitate remote work?” the high court asked in its ruling.

About 7.9 million people reported they were not caught up on rent in the most recent Census Bureau survey, conducted in late July and early August. Of those, about 3.6 million tenants said they were “very likely” or “somewhat likely” to face eviction in the next two months.