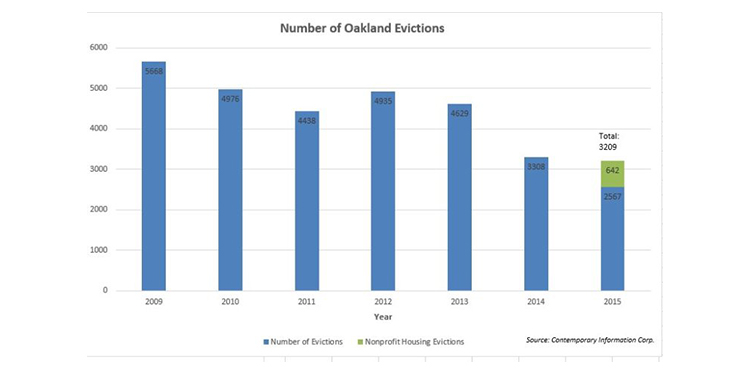 OAKLAND – (May 17, 2016) Oakland officials are using misleading and unsupported data about rent increases and ignoring new information on court-approved eviction rates to justify new housing rules designed to further punish rental property owners in the city, according to a survey of rent-controlled property owners and multiple analyses of eviction data.

The survey of the owners of nearly 2,200 rent-controlled units in the city found average rents cited by city officials to justify the recent moratorium were overstated by 100 percent.

In a subsequent analysis, Oakland city staff reported the number of sheriff-needed evictions in the city in 2015 to be 1,296 – another indication that the numbers are being vastly overstated by renter-support groups to justify draconian measures against rental property owners.

“The city administration continues to ignore the rights of small business rental property owners, many of whom own fewer than five units and are struggling under the weight of city regulations, despite clear evidence that City Council and renter advocates are misleading the public,” said Jill Broadhurst, executive director of the East Bay Rental Housing Association, which commissioned the in-house rent survey of its members. “Mom-and-pop rental property owners support their city and contribute in many ways to the community. Our city leaders should recognize the concerns of these small business property owners before imposing unfair new housing regulations.”

The online survey of Oakland rent-control apartment owners, conducted over a two-week period in April, found housing data vastly different than that being pushed by renter-support groups. Among the findings:

Broadhurst noted that the recent moratorium on rent increases imposed by City Council only impacted units already under rent-control, which are currently limited to rent increases of 1.7 percent a year. The moratorium also lifted the rent-control exemption on owner-occupied properties of 2-3 units, unjustifiably punishing small mom-and-pop property owners simply to satisfy renter-activist groups.

The city staff report was part of a review of a ballot initiative proposed by renter-support groups that would significantly increase the fees imposed on rental property owners while further restricting their ownership rights. The staff report estimated the ballot measure would increase city costs by $24 million over the first few years while doing nothing to improve the housing shortage. Nonetheless, City Council is widely expected to ignore the staff’s findings and pursue many of the changes recommended by renter-support groups, either through the initiative process or separate legislation.

The EBRHA eviction analysis also found nearly 20 percent of the total court-approved evictions in the city last year were from rental units owned or managed by non-profit housing organizations, such as the Oakland Housing Authority, the East Bay Asian Local Development Corporation, Oakland Affordable Housing Preservation Initiative, Operation Dignity, the John Stewart Company and others. This further dispels the myth promulgated by renter-support groups that evictions are being carried out by “greedy” private property owners out to line their own pockets.

“Non-profit agencies aren’t even under rent control restrictions yet they face some of the same realities as private property owners – how to manage rental units in a city overburdened with government regulations,” said Broadhurst. “City Council needs to understand the realities of the current housing market and not make public policy based on misinformation from renter-support groups. Private property owners intend to fight this one-sided campaign and stand up for their rights.”

Written by Jill Broadhurst. Jill Broadhurst is an Oakland resident and the Executive Director of the East Bay Rental Housing Association. She can be reached at jbroadhurst@ebrha.com.