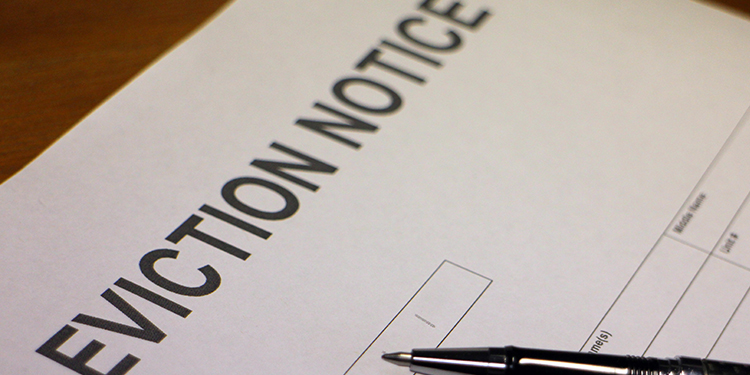 If a landlord wants to evict a tenant, the process can be simple. In many cases in Los Angeles, and across California, property owners only have to state they are ending the lease.

No justification is needed — only notices of at least 30 days to provide some time to move out.

Now, amid an affordable housing shortage and reports that low-income tenants are being displaced for wealthier renters, Los Angeles is exploring whether to require landlords to show “just cause” to evict, reasons that would include damaging a unit, creating a nuisance or not paying rent.

Tenants of rent-controlled units already have that protection, but landlords of newer, unregulated buildings can end a month-to-month tenancy without providing a reason.

“I am not getting why we have evolved [into] a two tier system of eviction protections,” Councilman Gil Cedillo said at a recent housing committee hearing.

On Wednesday, the City Council approved a proposal from Cedillo to study extending the just cause requirement to non-rent-controlled buildings, which usually have been constructed after 1978.

The city attorney and the Housing and Community Investment Department now have 30 days to give recommendations on how the city could proceed. The Council would then have to tell the city attorney to draft an ordinance, which would require a separate vote.

Tenant advocates have complained about evictions from nonregulated buildings for years, alleging the lack of legal protections can cause a tenant to lose a place to live despite doing nothing, or for simply making a complaint about a needed repair.

But they say legal protection for tenants is even more necessary in today’s red-hot real estate market, in which investors are buying buildings not under rent control and evicting low-income tenants to rehab units and rent them at higher rates.

Data doesn’t exist on how often that happens. But Larry Gross, executive director of the Coalition for Economic Survival, said his organization is receiving more complaints about the practice, specifically in gentrifying neighborhoods such as Highland Park and Boyle Heights where wealthier residents are moving in and interest from investors has been high.

“Right now a tenant not protected with rent control can be evicted without any reason whatsoever and thrown out onto a rental market which they likely won’t be able to afford,” Gross said.

Under California law, tenants do have some legal protections. No landlord can evict for retaliatory or discriminatory reasons, though tenant groups note renters often have to sue to enforce those protections and even if they do, proving the allegations can be difficult.

“With just cause, tenants are protected on the front end against abuses,” said Aimee Inglis of the statewide advocacy group Tenants Together. “It’s basic fairness [to require] a landlord to cite a reason for eviction, rather than allowing this to happen arbitrarily.”

Landlords have come out against the proposal, saying there is a financial incentive to keep units occupied and most landlords are not evicting people to bring in higher-paying tenants.

Landlords say their experience at rent-controlled units shows evictions with just cause is an expensive, time-consuming process when tenants choose to fight it.

“Something as easy to prove as nonpayment of rent is now taking up to six months to enforce,” said Fred Sutton, director of government affairs for the Apartment Assn. of Greater Los Angeles.

Evicting a tenant for other reasons such as being a nuisance can be even harder, he said, because it usually requires witnesses who may not want to confront a neighbor.

Landlord groups say that even if a small minority of landlords are evicting lower-income tenants for wealthier ones, the city should instead focus on fixing the underlying problem: a housing shortage.

Just cause is required in rent-controlled buildings in part so that the law isn’t undermined. Rent is capped for current residents but can be reset at the market rate once tenants leave, which gives landlords a theoretical incentive to get rid of long-term tenants.

But while requiring just cause for buildings not under rent control would make evictions harder, tenant advocates say not even that is not a perfect solution.

The law would not stop landlords from raising rent beyond what a tenant can pay — another tactic advocates say is already used to get people out to renovate units.

Still, Walt Senterfitt, who is on the policy team of the L.A. Tenants Union, said just cause could give tenants a better argument in court that a dramatic rent hike was really an underhanded way to carry out a discriminatory or retaliatory eviction.

That, Senterfitt said, would probably make it harder for developers to quickly rehab an entire building for wealthier people, hopefully giving them pause that it won’t be as easy or cheap as “real estate brokers are telling us.”

The limitation of the approach is what’s driving an effort by tenant groups to make it possible for cities to impose rent control across the board.

Right now, the Costa-Hawkins Act., which passed in 1995, limits what kind of units cities can put under rent control. In Los Angeles, that means except in rare circumstances, buildings built after Oct. 1, 1978, can not be rent controlled.

A push to repeal that law stalled this year in the Legislature.