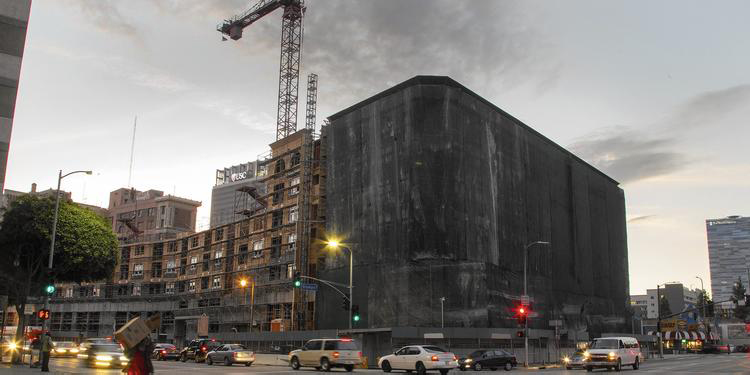 A Los Angeles ballot measure pitched as a way to provide good jobs and less expensive housing would instead worsen the city’s affordability crisis, according to an economic analysis released Thursday by the measure’s critics.

The study targets Measure JJJ, which is backed by labor and tenant advocates. If passed by voters on Nov. 8, it would impose new hiring and affordability requirements on developers if they want city approval to build apartment and condo projects larger than zoning currently allows.

Proponents of the measure, also known as Build Better L.A., see it as a way to ensure that the city gets tangible benefits for relaxing development standards that when waived can make projects denser and more valuable.

But business groups say the new rules would simply be overly burdensome and make it too expensive to build many projects, given that the city’s outdated planning and zoning code often doesn’t allow for the kinds of projects developers see as economically viable.

“If you don’t have the housing, people are going to continue to outbid each other,” said Adam J. Fowler, manager of Beacon’s public policy research team. “It’s one of the very few issues that economists look at that is really straightforward — what we are looking at is really a supply problem.”

Measure JJJ applies to projects of 10 units or more where developers get a zoning change, general plan amendment or height-district change to build higher density projects than currently allowed, or to build homes where current zoning doesn’t allow them. Those projects would then have to include a certain number of below-market units or their builders would pay an off-set fee to the city’s affordable-housing trust fund.

That requirement would cause market-rate units in such projects to increase in price as developers pass along the cost of subsidizing affordable units, Beacon said.

Perhaps more onerous, business groups argue, are hiring requirements. The majority of construction workers would need years of experience or at least be enrolled in apprenticeship programs, so as to discourage the hiring of cheap casual labor.

Developers also would have to pay wages set by the city government and hire a certain number of local and disadvantaged workers.

The measure doesn’t detail what the wages would be besides that they will be “area standard wages” set by a city agency. Business groups say they are likely to be so-called prevailing wages that public projects require. Under that scenario, project costs would jump 46% because those rates are almost double typical wages, according to Beacon.

In response, Rusty Hicks, executive secretary-treasurer of the Los Angeles County Federation of Labor, said it would be up to the city’s Bureau of Contract Administration to decide how to set area standard wages.

Such additional burdens are easier for developers of large projects to absorb because they can spread costs over a bigger budget and many already use union labor. That has prompted business groups, like the Los Angeles Area Chamber of Commerce, to focus their concerns on smaller projects they say would be stifled by the new requirements.

According to the Beacon analysis, over the last decade. about half of permitted multifamily projects that sought changes targeted by JJJ had 11 to 50 units. Another 17% were for projects between one and 10 units, while 36% were for projects with more than 50 units.

“When looking at smaller or midrange housing developments, they no longer pencil out,” said Ruben Gonzalez, a senior advisor with the Chamber of Commerce, which along with a coalition of business groups funded the Beacon study.

Economists have long said the failure of housing production to keep up with population and job growth is the main factor in today’s affordability crisis. They argue that construction beyond even today’s development boom is needed to make Los Angeles affordable again.

But measure proponents argue that adding more supply is an overly simplistic answer to the crisis. They note that the current development boom is heavily focused on luxury housing and hasn’t brought down rents.

“We have a housing crisis and a good jobs crisis in the city of Los Angeles,” Hicks said. “The measure requires developers to give construction jobs to Angelenos who need it the most and to build housing people can actually afford.”

Hicks estimated that if JJJ had been in place over the last three years, 5,500 market-rate units would instead have been designated affordable. He said business groups’ claims about reduced housing construction mirror arguments against the minimum wage increase and other efforts to “move this city forward and increase the quality of life.”

“There is always [the argument that] the sky is going to fall, that this change is going to crash the industry. And you know, the facts have always gotten in the way of that argument,” Hicks said.